I’m just going to blog about this one briefly, in case their are any other enterprising Wine Cooler owners out there who find that, two years into owning their cheapo wine cooler, the power supply craps out. I didn’t take pics all the way through, so it won’t be much of a step-by-step build log.

A couple years ago I bought a “AZ-EA45EC-75” on Amazon. If you read reviews for these wine coolers, you WILL notice that there are more complaints about the cheaper ones breaking down after a year or two (often out of warranty). But I figured the price differential was worth it, especially if I got one  that is cooled via Peltier thermocouples, since I’d have a chance at repairing it if something went out.

Sure enough, a few months ago, the power supply went out. I can troubleshoot basic electronics, but troubleshooting a switching power supple (which this thing had) is a bit beyond me. I did try replacing some darlington transistors that showed a lot of heat discoloration on the circuit board, thinking they might have burned out (one was not very well secured to the large heat sink). No go. Maybe there was a cascade failure or something…i think maybe the winding on one of the very specialized transformers was also out. I even succeeded in tracking down the Chinese manufacturer of the power supply (the website was printed on it), and emailed them to see if I could just buy one unit. After a couple tries, I actually got a response (in bad english) that I think said I could send it to them and they would repair it for, like $80, and send it back..with me paying shipping both ways. No thanks.

In pulling the thing apart, I learned that the cooling system consists of the switching power supply, two thermocouples – each with an outside and an inside fan which look like typical PC power supply fans – some kind of internal temp sensor, and a little control board that includes the temp control buttons and current temp readout. Oh, and a little LED light array inside that you can turn on and off with a button on the control panel. They all connect to the power supply. The thermocouples and fans are just 12V powered, but clearly there is some logic somewhere to throttle how much power goes to them, since it would work harder when trying to cool down, but bee nearly silent when the internal temperature matched what you set the controller to.

The controller board had a 5 pin connector, and it was actually labeled: 12V, Gnd, LED, NTC, and PWM. I guessed (correctly) that LED controlled power to the light – I think it was just wired straight though on the power supply, since 5V regulated came out on that pin, and the LED array required 5V to light up. PWM was interesting – my guess (again, correctly) was that they Pulse Width Modulated the power to the two sets of thermocouples and fans. To verify this, I finally broke down (after 30+ years!) and bought  an inexpensive USB-based oscilloscope. I bought a Sain Smart DDS-120 for about 150 bucks and it was totally adequate for my needs…and now I finally have at least a cheap o-scope!

Anyway, using the o-scope, I verified that there was a 5V square wave coming out of the PWM in. Actually,  first I had to figure out what “NTC” was. Initially, providing 12V to the controller made the LED readout light up fine (and the LED button controlled whether 5V came out on that pin or not), but the readout would flash a few times, then show “E1”. I though on it a while and figured maybe it needed to sense a temperature to work. Turns out, it’s common to sense temperature with is an “NTC”  thermister 🙂 I wired a resistor in the 10K range across the NTC pin and Gnd and – sure enough – the readout would show 59°. When I turned the temp down below 59, the “off” period of the PWM square wave was longer – when I set the temp over 59, the “off” period got shorter. So, the “off” time of the PWM theoretically drives the power to the thermocouple clusters…kind of an inverse relationship..not a big deal, since I could easily invert that signal if necessary.

I started casting about for an easy way to drive a fair amount of power via the 5V logic signal from the PWM pin – from googling around, I estimated that driving a thermocouple and a couple of fans at full power could eat an amp or more. I prefer to find pre-assembled boards for more complicated circuits, since assembling a lot of discrete components can be pretty error-prone, plus I’m just not that great at linear circuit design. After looking around a while, I decided on the Monster Moto Shield. Intended to drive robot motors, this sucker can sink a lot of current. As the name implies, it’s intended to be used with an Arduino, but I just hard-wired the control pins to the appropriate logic level and tied the PWM pins to the PWM out from the fridge controller (after going through a couple of inverter components, described below).

I should say, in between all this – which took place over a week or two – I temporarily rigged up one thermocouple/fan set to just run continuously off a 12V laptop power supply I had lying around. This actually worked pretty well. Since I was just running one, it seemed to keep the cooler chilled, but not too cold. I even considered making it more permanent, and just buttoning it up and blowing off temp control, but that would have been to easy 🙂

Here’s a rough Fritzing diagram of the whole rig. 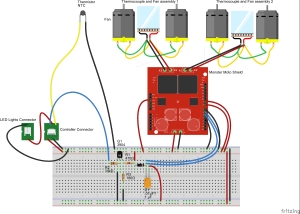 Update (4/28/16): As I tried this rig out hooked up, I discovered that it had trouble getting the temp below about 58°. This seemed to be due to the fact the the PWM duty never really got above more than about 60%. I added a low-side resistor on the transistor emitter to bias the output higher, then a diode and a capacitor which effectively “store” some of the “on” energy, while the diode prevents leakage backwards. This smoothed out the output, but also biased it slightly higher, resulting in more time above the Moto shield’s PWM trigger level. I basically picked the values by just experimenting – in fact, I’m not even positive of the cap value – I just found one in my tray of caps that was in-between doing almost nothing and causing the PWM signal to basically be always-on.

I bought a cheap 12V switching power supply capable of delivering multiple amps from China. Here’s a picture of the whole thing rigged together temporarily. It looks like a rats nest, but will look a lot better when I consolidate all this into just the power supply, Moto shield, and a little daughter board.

The Moto shield gets pretty hot when it’s really cooling, so I stuck a couple of little heat sinks I had to the two VNH2SP30’s, and even they seemed inadequate, hence the extra aluminum foil 🙂 For a more permanent solution, I’ve order a half dozen 20mm x 20mm heat sinks from Amazon that should arrive in a couple of days.

Total cost for all this – about $50. That’s not included the O-Scope, but everone deserves an o-scope! And of course, time…I spent a lot of that reverse engineering and tinkering with getting the input levels right on the Moto pins. Definitely a cheap fix, PLUS now I have something that’s much more maintainable, since I basically put the whole power circuit together myself.

Update (1/25/2018): Well, my cheapo Chinese power supply burned out – these things really don’t last well! I think part of the problem may be poor ventilation around the supply. Anyway, I bought one of these: https://www.amazon.com/gp/product/B01ET14J8O for about $35. It has an integrated fan, which I hope will keep it cooler and help with lifespan. I intend to remove the case and just mount the guts to the wine cooler. The fan is actually kind of loud, so I may also order a quieter 50mm 12v fan. I also wasn’t very happy with the above circuit to drive the Moto shield from the PWM signal – it was never getting below about 57 degrees – I guess because the square wave didn’t have enough “on” time. So I’m just going to replace the control circuitry entirely with an Arduino. While I’m at it, I’m going to wire in an ESP8266 with an OLED screen to display the temp and let me monitor and set it via WiFi. It’s not lost on me that, at that point, aside from the thermocouple-and-fan assemblies, I’ll have practically built a wine cooler from scratch

Actually…maybe there’s a business in custom wine-fridges… Anyway, I’ll do a post about it shortly.

This entry was posted in Technical. Bookmark the permalink.