Posted on January 24, 2016 by austinlightguy

Well, it’s well past Christmas and things have finally settled down for me a bit, so I figure it’s high time I blog in a bit of detail about my main Christmas technology focus – Version 2 of the AustinLightGuy Light Suit. I’ll post links to resources I incorporated this year at the bottom of this post.

I’ve been wanting to do a major upgrade on the original light suit for some time with these main goals in mind:

I’ll address the last first, since it was the easiest…

Cranking Up the Sound

Turns out most places we go to in our light suits are actually pretty noisy – there’s usually lot’s of people around talking and maybe even other music sources…Christmas music on the PA around the Zilker Tree and Trail of Lights (GREAT job on the Trail of Lights this year, by the way, despite modest entry fees – kudos to organizers and sponsors), music in bars, etc. It would be cool if the Suit could be synchronized to ambient music, but it’s usually kind of drowned out by crowd noise, so I figured I’d try out something

else – crank up the volume on the suit.

The original solution, which was just a crummy little set of bluetooth speakers that paired to my phone, was way to quite. So this year, I just got a set of relatively high-powered PC speakers, rigged them up to where they could be snapped on to the new suit, and drove them directly from the line-level audio (which is actually a pass-thru on the new master controller that I’ll describe shortly). They run off the same 12V “power bus” that the whole suit runs on (more on that later). I wrapped them in nice, fluffy faux fur to make them Christmassy.

These pretty much rocked, but in bars, they still got drowned out a lot of the time, so I wound up going with the (single, for now) pre-programmed pattern.

Ok, so now on to the interesting technical stuff…

I wanted to be able to synchronize even more “remote devices” this year – beyond the two staffs, the light cape and LakewayLightGuy’s suit. But I also wanted to retain backwards compatibility with those devices so I didn’t have to completely rebuild them, as well. It just so happens that I had recent been turned on to the ESP8266 family of devices. These are basically amazingly cheap SOC modules that contain a processor, flash RAM, and even WiFi, all in really small form-factors. There are really bare-bones boards (like the ESP-01) incorporating this chipset that can be had for as low as a couple bucks from China, up to more sophisticated boards, like the NodeMCU dev board and the EspToy, which provide good on-board power regulation, USB serial-to-TTL circuitry (necessary to flash them), and LIPO battery charging. There’s a huge community of support out here for these things, two or three tool chains, lots of code libraries, and many excellent blogs, including Pete’s excellent tech.scargill.net. The incredibly low price of these things (especially vs. the pretty expensive and proprietary XBee modules I’ve been using) led me down the path of deciding I should migrate to WiFi-based synchronization using ESP8266-based boards. I played around with a myriad of them, but wound up using a NodeMCU, an EspToy, and multiple ESP-01’s.

To test the WiFi concept, I cobbled together a prototype setup where I took existing Arduino suit controller and had it feed RGB values via serial port to NodeMCU dev board (the “master”). I wrote some simple LUA code to set the device up as an Access Point, then send UDP broadcast packets out every time it received a set of RGB values over the serial port. I also created a “slave” by flashing a basic ESP-01 with a version of firmware that supports WS2811/12 (standard in latest build) and wrote some simple LUA code (based in part on an example here) to connect to the Access Point and listen for UDP broadcasts. When it got a UDP packet, it would pull the RGB bytes out and write them to a short string of WS2812’s I was experimenting with (similar to this). The result was pretty good – although the packet rate is a little low I think probably around 10hz, so 10 updates a second, or maybe a tad lower. I tried using my home wifi instead of setting up my master as an access points, but that was actually slower. I really still need to try to recreate the code using the native SDK and C (or preferably, an Arduino sketch) to see if I get better packet rates.

The real problem is – there is some latency between when a sound occurs and the data packet makes it across the serial port, then over Wifi, to the “slave”. The delay is in the neighborhood of a half a second. As a result, the lights are sync’d to the music, but the response lags by about a half second. The delay is more obvious when you ahve it next to one of my XBee “slave” devices, since those respond with almost no lag at all 😦

My first thought was that I could introduce a hardware chip that does audio delay – I did something with a “bucket brigade” chip years ago – or maybe just by an off-the-shelf delay circuit. I didn’t really find anything I like much off-the-shelf…mostly guitar-oriented stuff that was pretty pricey (and big). Then I ran across Teensy! The Teensy (3.2) is a little dev board, with your usual array of I/O pins, but it’s got a 72Mhz ARM processor as well as ADC (analog-to-digital) and DAC (digital to analog) ports. You basically write Arduino sketches and use the “Teensyduino loader” to load your code onto the Teensy. It’s inventor, Paul Stroffregen, seems to be pretty into Audio or something, because he’s got a stupendous audio library and he provides a really cool online tool (built on Node-Red) to wire audio flows together graphically then export code. There are simple examples for wiring line-in and line-out to the ADC and DAC in the help that accompanies the nodes.

Here’s an example, taking and ADC input, piping it through a delay, then feeding the result the the DAC:

Then you just add little bits of code to do stuff like set the delay on channel 1:

That’s a lot of stuff going on in my new master controller, so I also decided I would drive my suit, which used to be connected directly to the Triac board in my master controller, via a new “slave”, which would just house an ESP8266 as a UDP receiver and WS2811 driver, and a 12V to 5V regulator to drop by suit power supply down to the 5V the WS2811 strings want.

So here’s the high-level picture: 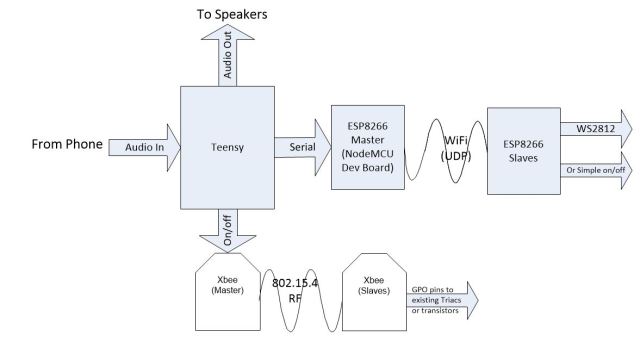 And here’s the new master and new suit slave: 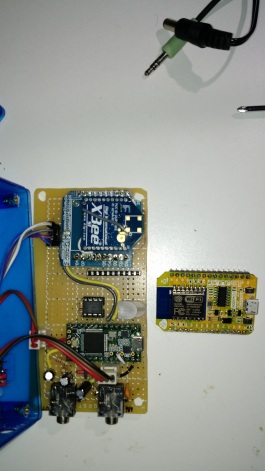 An ESPToy, with two Buck regulators, including two heat sinks each

Complicated, I know.  In the next post, I’ll go into a little more detail on some of this, some of the cool things it let me do, and some additional complications I ran into.

Here are links to stuff that went into this build. Many of them link to Amazon, EBay, or AliExpress, so if they go stale, I apologize. I’ll try to make the descriptions usefully google-able.

This entry was posted in Uncategorized. Bookmark the permalink.